Hello again. CMDR Maya Ulniian here. Today I lost another ship and came very close to financial ruin. As mentioned at the end of my last message, I swapped out my A-fit Eagle fighter for what should have been an upgrade, the very solid Viper Mk IV.  Not quite having the funds to equip it the way I would like, I had to compromise with mostly Class C modules. It is still a formidable craft but has certain shortcomings that were soon made apparent.

Full of optimism I launched out from Haxel Port again headed to the Hi RES. As I approached the rings I was interdicted and decided to fight it off. During the dodging and weaving trying to break the interdiction attempt my ship flew too close to the surface of the ring and forced an emergency frameshift exit. The viper shuddered its way out of supercruise and dropped back to normal space taking a small amount of hull damage and triggering a bunch of module failure warnings. On scanner were two ships, a Federal Drop Ship and a smaller craft that was just out of identification range.
The FDS was listed as wanted and immediately opened fire as soon as I was in range of its weapons. Deploying weapons and switching to combat mode I returned fire. After the first pass, my shield was almost half gone, but worse, the Viper is just not as agile as my previous ships, nor were the c-class thrusters up to the task. The FDS soon managed to pull range and turn its weapons to face me and my ship was too slow to get clear.  We exchanged fire for several passes and I had managed to drop his shield but was taking too much damage in return. I switched to a defensive configuration, stowed weapons and attempted to boost past him and make the jump back to supercruise but just couldn’t get far enough out of his range to make it. I dodged most of the incoming fire but eventually a lucky shot knocked out my engines and I was a sitting duck for the next volley.

The resulting insurance bill wiped out nearly all my cash reserves and I also temporarily lost access to all my control interfaces (OOC: elite D crashed!). When functionality was restored, I found myself back in Haxel Port with a new Viper Mk IV.

My cash reserves were very low, such that if I lost another ship I could not afford the full insurance and risked losing everything.  As one of my favourite holo-dramas says, “Fear is the mind killer”. I will face my fear and conquer it. As such I took yet another trip out to the High RES to hunt bounties. 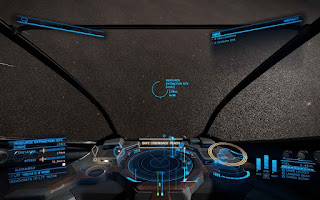 Only a few small ships offered themselves up before a tempting Python arrived on the scene. In my Eagle, I’d killed a number of such ships fairly easily but that was not to be the case this time. The lack of speed and agility meant I found myself inside the enemy guns too often and I retreated back to Haxel Port with significant hull damage and not many bounty vouchers to show for it.

Slightly later, I took a trip to the Low RES and shot at the lesser pirates for a while to recoup some losses. The Viper Mk IV was just too slow for my liking so I decided to sell it off and buy a Mk III instead.  The difference was astonishing!  The Mk III is fast and agile enough that I barely ever get shot. In a little over an hour in the Mk III I had gathered a heap of bounties, including a Fer De Lance that was worth almost 360k credits. I’ve now got a much healthier bank balance – almost enough to consider an exploration build Hauler.
Onward to the next adventure!
CMDR Maya Ulniian 25 April 3302

Posted by Cryptography at 9:47 PM