Hello again. CMDR Maya Ulniian here.
At the end of my last report, I had just purchased an Eagle class light fighter and given it some minimal upgrades after trading in my Sidewinder. A brief shakedown cruise out to the Low RES netted a few hundred thousand in bounties before I ended the day. This report is about my second fairly short session behind the flight stick. 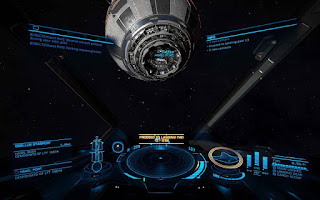 The first thing I did was visit the outfitters to upgrade a few items and apply a new paint job. I have a selection of different paint jobs for some of the cheaper ships as part of my pilot's graduation package, so I may as well show them off! I had also earned the first of hopefully many rank commendations from the Pilot’s Federation – a “Mostly Harmless” rating for combat. I applied the permitted decal to my ship as well. 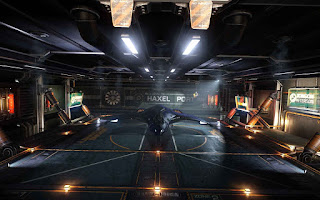 Once done with the outfitters, I launched again for my favourite Low RES looking for more bounties. Very quickly I was in luck with an Anaconda on scan and fairly soon after, a bounty claim on record. This was followed by a pair of Pythons, who for some reason were fighting each other, and their Imperial Eagle wingman. The IEagle popped almost immediately – I think I got in a lucky shot that disabled their drives so they couldn’t manoeuvre properly – but the pythons took quite a while even with them shooting each other. 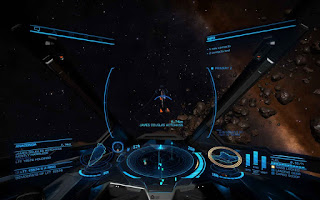 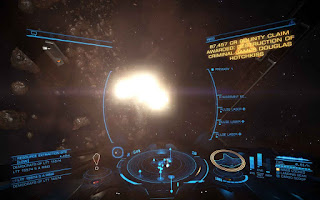 For a time there bounties dried up and the only ships available were innocent miners or several waves of police ships. Thankfully I’ve now killed enough pirates that the local police faction considers me friendly and their ships now display in green on my radar. Eventually some miners left and some new ships arrived. I hunted down quite a few smaller ships – Sidewinders, Adders and a few IEagles as well as a pair of rogue Viper Mk III’s for mostly small bounties. A hostile Asp showed up with a pair of eagles as wingmen. They engaged one of the mining ships which then attracted police attention and I gleefully picked off the weakest ships.

A neutral Python was under attack by two separate wings of small ships and I barely managed to save him by killing four of the hostiles and driving off the other two into jumping out. Unfortunately the Python was severely damaged and his shield was disabled. A reckless police ship collided with the lumbering Python and that was sufficient to explode his power plant. So much for my rescue!

I had taken a little damage in that last fight and was running out of time anyway so I stowed weapons and cruised on back to the station. Bounties claimed and ship repaired, my status looks like this at the end of session 2: 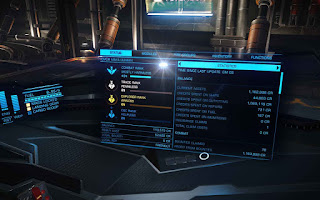 Posted by Cryptography at 11:18 PM