So there I was: Maya Ulniian, a freshly graduated and newly minted member of the Pilot's Federation with no money and few prospects. Unlike most of my fellow graduates, I was not to be drafted into the Navy, or take up a position with one of the corporate interests. A top one percent finish was not enough to make up for the lack of family connections. My inheritance from my parents was all gone, eaten up by tuition fees and living expenses. Whilst there were jobs available with the second and third tier mining or freight companies, most wanted more experience or reputation than I had, or the offered pay was so low that it wouldn’t cover basic expenses. Things were beginning to look fairly desperate.
Perhaps this was why the dodgy looking communication from J. Sneer, of Sue, Cripple & Sneer, Solicitors stood out from all the usual scams. A free ship with comprehensive insurance as well as a small credit transfer from an unknown benefactor. The attached message was intriguing as well:

ATTACHMENT-01
You may be puzzled right now as to why you’ve just received this little windfall. Nothing wrong with that – I’d be worried if you weren’t.
But now get ready for lesson number one. When a golden opportunity comes your way – and trust me, they’re few and far between, my friend – reach out and grab it with both hands. Sometimes it’s clever to ask questions, and sometimes it’s not. This time it’s not.
All you need to know is that my organisation has a very specific remit: to seek out those who have the potential to become real movers and shakers, those precious few with the talent to mould and shape the galaxy around them, to create change on a grand scale.
We find them, and then we test them. Consider this your test.
Take the ship. Take the money. No strings, no hidden clauses. Do with them what you will.
Blaze your own trail.
Impress me, perhaps you’ll learn more.
A Friend

The ship turned out to be a Sidewinder class starship equipped with a pair of gimballed pulse lasers, a discovery scanner and a small cargo bay. All I had to do was appear at Trevithick Dock, LHS 3447, present my access code and the ship was mine. With nothing better on the horizon, that’s what I did.

LHS 3447 was in a state of civil war when I arrived. Trevithick Dock itself was directly affected, and its commodities market was shut off. This severely limited my options as a brand new Commander. Trade insystem may have been possible at the various other settlements but the high number of conflict sites put me off even attempting anything. Plus, the very limited cargo space and funds available make trading a slow option at best.

There was plenty of work for a combat pilot by picking one of the opposing factions and fighting at a conflict zone but this is not a likely option for me in a very fragile Sidewinder.
LHS 3447 also suffers very long distances between its stations so there is a lot of wasted travel time.
I had heard that there was decent money to be made collecting bounties at the Resource Extraction Sites in the nearby system LTT 15574 so I fired up my nav computer and plotted a route.

First I jumped to Eravate, then to Kini. In Kini, my discovery scanner found both stars listed as undiscovered so I took the time to scan them both. Just before jumping out after scanning Kini B star, I was interdicted by a Dangerous rated Adder pilot. Adrenalin flowing, I deployed weapons and engaged. He had the initial advantage and managed to knock out my shields on the first pass but I was then able to sit on his tail out of his field of fire and plink away at him. It took a while but his shield failed under my lasers, then his hull slowly boiled away. Since Kini is an anarchy system and I had no kill warrant scanner, there was no applicable bounty.

After another uneventful jump I arrived in LTT 15574 and immediately set course for Haxel Port. This station was to be my base of operations for some time to come since it was relatively close to the RES sites on the nearby rings. After a quick supercruise trip insystem I arrived at Haxel port. Docking permission requested and then granted, I flew on in and landed my ship at the relevant docking bay. 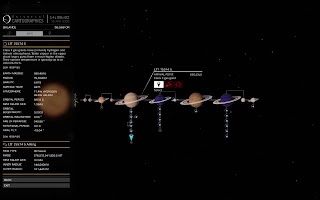 A quick refuel and repair set me back nearly 300 credits. This would further reduce my chances of making a living as a trader. I was desperate to get a good start Bounty Hunting. RES sites come in 4 varieties, helpfully noted on your ship’s nav computer. Low intensity RES sites tend to have lower ranked enemies and more regular patrols by the local security forces. High intensity RES sites are more challenging, with higher ranked enemies often in the larger ship types and less frequent security patrols.  Hazardous RES sites are tougher again and are so hostile the local cops avoid the place. A RES site without one of these labels is a middling affair, somewhere between Low and High RES in difficulty.  For me in my low powered beginner ship, one of the two local Low RES sites was looking good.
After a brief systems check I launched my trusty sidewinder out the letterbox gateway of Haxel Port, boosted away from the mass-lock zone and made the shift to supercruise. Haxel Port is a little over 90 light-seconds away from the ring system of LTT 15575 5– a muddy brown class II gas planet. As I flew closer I noticed that the Low RES I had chosen was right on the edge of the ring within the shadow of the planet. On dropping from supercruise at the site it was clearly well within the “night” time and visibility of the asteroids was a problem. Still, I checked my scanners for any likely bounties. There was nothing but a few miners and a lonely System Defence boat so I flew out of the rocks and back into supercruise headed for the other low RES. 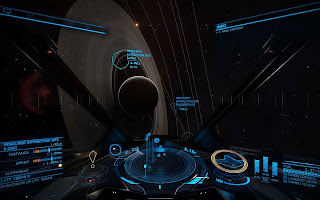 Of course, this other RES site was located on the opposite side of the planet. My path took me over the northern pole which gave a spectacular view but also severely interfered with the frame shift drive, slowing progress dramatically. Eventually I arrived back at the ring and dropped out of supercruise about 15km from the beacon.  Almost immediately ships started appearing on scanner.
Oh joy! The first “wanted” ship on scan in my career was a “Dangerous” Anaconda with an 80k bounty – and he was already heavily engaged with the local police! I quickly deployed my guns and raced over towards the conflict. By the time I was in range, the ‘conda’s shield was gone and hull was down to about 60%. I added my feeble firepower to the fray while staying well out of the firing arc of his guns and soon he was down! Almost immediately, a somewhat smaller Python craft opened fire on the police and I was able to join in on that as well. Another 50k bounty! At this point I was considering jumping back to station to hand in and had retracted hardpoints when I saw a damaged Fer De Lance on scan. His health was going down fast, so I charged over and fired as soon as in range. That was a terrible mistake!

The Pilot’s Federation only credits kills if your scanner has completed at least a basic scan on a target. However, if you don’t wait long enough and attack before that wanted status is confirmed, you are treated as having attacked an innocent party and your own computer flags you as “Wanted” to all in the system. This is the case even if your target is under attack by the local cops – as I found out to my horror. I needed to get away, let the heat die down and pay any fines from somewhere nice and quiet. I stowed weapons, put all power to engines and started spamming the emergency boost button to get out of there all to no avail. The 5 or so police ships finished off the Fer De Lance then focussed fire on me. My shield lasted about 2 seconds. The Sidewinder hull melted almost instantly and I was forcefully ejected into space.

When next I opened my eyes, I was being presented with the insurance paperwork to replace my ship and forcing me to take out a loan.  After all that excitement I was pretty much back to where I started. No bounties to claim, no cartographic information to sell but at least I was alive.

I admit I considered trying trading as a slower but safer option given my near death experience but decided to risk it all again. This time, I arrived at the RES site with a lot more caution. My first few targets were Asp Explorers with 30k bounties, then a couple of smaller ships worth only a few thousand, but this soon built up to over  100k. The contacts office at Haxel Port was glad to trade in the kill vouchers for cold hard credits which I promptly spent at the outfitters.

I upgraded most modules from the standard E rated stuff to the lightweight and usually more powerful D rated gear. I splashed out and upgraded my power distributor to the best A rated module available – a very significant boost to ship performance.
The upgraded Sidewinder performed brilliantly on my next trip to the RES. There were a couple more Pythons and an Anaconda menacing the local miners but the local police and my upgraded ship made short work of them. With a much healthier credit balance I hit the shipyard and outfitters again.

My current ship is an Eagle – a wonderful light fighter. So far I’ve only made a single brief run out to the RES but it is clearly a vast improvement over the Sidewinder. I’ll be back working on it once I get this message posted! 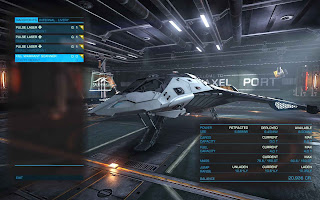 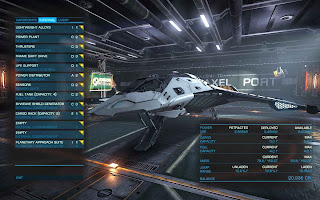 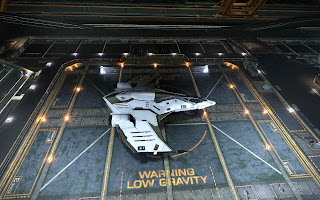