I like exploring the zones in classic wow more than the current version. Attempting to get into areas that you aren't really supposed to is fun, as is finding some of the obscure, out of the way things.
In western Tirisfal Glades, there is a particular spot on the cliff wall where you can run up and from there you can get into an area that hasn't been properly textured. Its an interesting area with one very deadly hole in the ground. I found what I think is the entrance path again on classic today. The glitch to get in there worked most reliably while mounted and was nearly impossible if just on foot so I've been unsuccessful getting in so far - but I suspect it is still possible!

An area that I was very happy to see has returned is an old elf tower and some ruins beyond the northern mountains in Eastern Plaguelands. Now my guy is only level 8, nowhere near capable of taking on the horrors of EPL yet so it is lucky that this area is accessible via Tirisfal Glades.
You basically go to the extreme North East of Tirisfal, avoiding the Scarlet Crusaders and the Murlocs, then jump into the ocean and swim east along the coast. 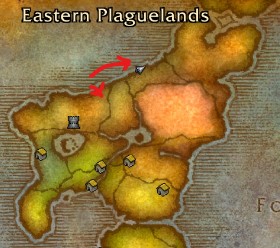 It is a long swim.You must hug the coast the whole way around else you start to hit fatigue and can drown. There are several areas where you can get out of the water and clamber about on rocks but there is nothing much but grass to see. Eventually in the smoky haze of distance you can make out a spiky hill. 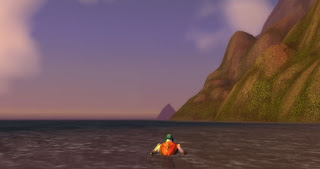 After small stretch of water where you get fatigued, you should see some trees sprouting from the hill, and then an upraised finger of stone. 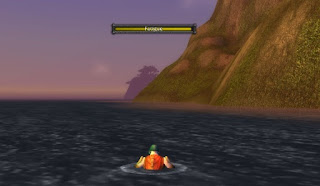 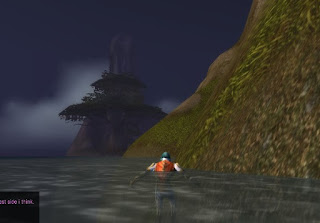 Once you get close enough you reveal a large mostly intact High Elf tower with a few lanterns still working. Interestingly, this location is still accessible in The Burning Crusade, despite being well within the Ghostlands area.
Here is the tower itself: 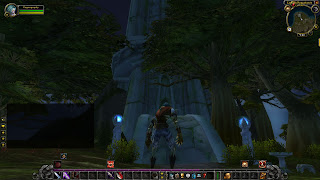 Also nearby is another ruined tower and an archway and dock. There is also a picnic table with two stone benches in the above picture.

If you continue swimming further east for about another 45 minutes, you can come to a small dwarf settlement that actually has some NPC's moving around.

Posted by Cryptography at 11:26 PM